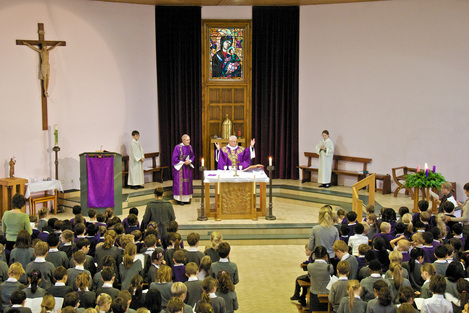 Big oaks from little acorns grow....
What is now Rydes Hill Preparatory School was formerly Rydes Hill House which was purchased in November, 1945 by the Ladies of Mary, a religious order who opened it as a voluntary fee-paying school, mainly for girls.

The nuns had their own chaplain, Fr John Beenker and, having converted a large room into a chapel, kindly allowed this to be used as a Mass-centre for Catholics in the area. Two Masses were celebrated here every Sunday.

In 1955, Fr John Campbell-Price became the priest-in-charge. The congregation was growing and soon numbered 100. Several petitions were sent to the Bishop (of Southwark) asking if a separate parish could be formed. All endeavoured towards the building of a church, and at long last the Bishop agreed.

It was Fr Campbell-Price's idea that the foundation stone should come from the Saxon church of St Mary's in Quarry Street, Guildford; the earliest part of which dates back to the 11th century. So it was that the foundation stone, to be seen on the outside wall of the church, was laid on 28th June 1963 by the Bishop of Southwark, Cyril Cowderoy.  Subsequently, he formally opened the church just a year later on 27th June 1964. This was on the Feast of its Patron, Our Lady of Perpetual Succour, which means 'constant help'.

Incidentally, it was Bishop Cowderoy who, the following year, in May 1965 became the first Archbishop of the new Province of Southwark.  At the same time the new Diocese of Arundel & Brighton was set up with David Cashman to become its first Bishop.

The church of St Mary's was originally designed with a flat roof, but this did not weather well, and serious damage was later discovered. It required a complete redesign, and in 1978 rebuilding followed under the tireless and enthusiastic direction of Fr Michael Reynolds. This incurred a great debt for the parish, in addition to the original church building costs, of which a sizeable sum still remained owing. Only after the whole debt had been repaid could the church be solemnly consecrated.

It was a memorable day for the parish when, on 28th June 1985, St Mary's church was duly consecrated by the Bishop of Arundel and Brighton, Cormac Murphy-O’Connor. The consecration stone on the inside wall, above the stairs at the back of the church, shows that the church has been dedicated to God's service. Above the inscription are the initials D.O.M., Deo Optimo Maximo meaning to God, the Best and Greatest.

The church building was consecrated by anointing the twelve bronze crosses around the walls of the church, a reminder of the Heavenly Jerusalem whose city walls “stood on twelve foundation stones, each of which bore the name of one of the twelve apostles of the Lamb.”        (Rev. Ch. 21 v.14)

The Silver Jubilee of the solemn consecration was celebrated on 26th June 2010 by the Right Rev Kieran Conry, Bishop of Arundel and Brighton. 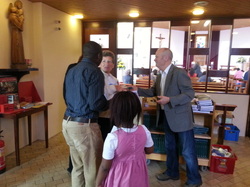 Entering St Mary’s
In the porch are receptacles for holy water which is used, on entering the church, to bless oneself while making the sign of the cross; these are called stoups.

The confessional where the Sacrament of Reconciliation is celebrated is on the left-hand side, as you enter the narthex. This small sound-proofed room contains a kneeler and half screen, and also, a chair, for the penitent who wishes to make a 'face-to-face' confession. Set in the wall are four Dutch bricks, to the memory of Fr Beenker, the first priest to celebrate Mass in Rydes Hill House - at 11.00am on 11th November 1945.

The cupboard with a display window showing bibles and missals etc, for sale, is called the repository. Behind the glass screen is a small side chapel called the Lady Chapel (after Mary, Our Lady, Mother of God).

The Blessed Sacrament is reserved here once a year after the Mass of the Last Supper on Maundy Thursday until the Vigil Mass of Easter.

Enter the main part of the church, and in a bay on the left-hand side is a large stoneware jar and jug. This contains holy water (water that has been blessed by the priest) which is used to refill the containers in the porch, and also for parishioners to help themselves to small quantities for use at home.  Above this on the wall is a statue of Jesus, called the Good Shepherd, as he is depicted carrying a lamb. 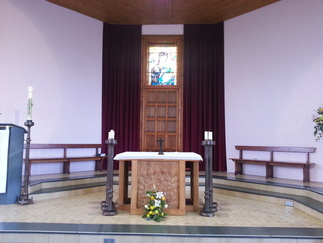 The altar steps mark that part of the church called the sanctuary in the centre of which is the altar, the table of the Lord.  It is traditionally made of stone, a reminder of the time when the Mass was celebrated secretly in the catacombs where the early Christian martyrs were buried.  The altar was sealed at the time of the consecration and cannot be moved.  Within the altar are the relics of three saints of the first century, St Pius, St Boniface and St Fortunatus. The altar, which was designed and made in Germany, is carved on all four sides.  The wood engraving on the front, facing the congregation, depicts the Last Supper.  The other three sides show scenes from the Old Testament and are scenes of offering, i.e. Abraham offering his son Isaac, Melchisedech offering bread and wine, and Elijah being offered food and drink by an angel of God.

The altar cloth covers the top of the altar and in addition, during the celebration of the Mass, the corporal is placed on the altar. This is a linen cloth about the size of a table napkin on which the body of Christ is placed when consecrated.
The Church Bell
The church bell was originally cast in 1868 at the Whitechapel Bell Foundry for St Mark's Anglican church in Coventry. Later, due to movement of population, the church became redundant.  The bell was eventually presented to St Mary's by R Ferrans, in memory of his late wife.  The bell is electrically operated and  rung at the time of the consecration. It also chimes automatically at 9.00am, 12 noon, and 6.00pm reminding the faithful to pray the Angelus

Our Lady of Perpetual Succour, Sanctuary, Tabernacle and Paschal candle

In the wall behind the altar and overlooking the sanctuary is a stained glass window of the icon showing Our Lady of Perpetual Succour. The stained glass shows Mary (MP-ÈÕ, meaning Mother of God, has been inscribed above her) looking towards the faithful, while pointing at her son, Jesus Christ (Iò-Xò) who is depicted looking at the instruments of crucifixion and with a fallen red sandal. On the left side is the Saint Archangel Michael (OɸM), carrying the lance and sponge of the crucifixion. On the right is the Saint Archangel Gabriel (OɸÃ) carrying a 3-bar cross and nails. 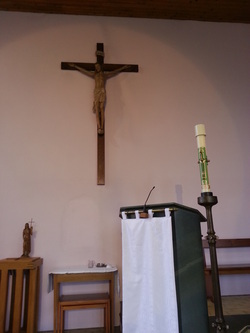 On the wall to the right of the sanctuary is a large crucifix which reminds us that Our Lord Jesus Christ died for all mankind, on a cross.  Below this is the lectern (ambo) from where God's word is proclaimed during the Mass, either by the Deacon or Celebrant taken from the gospel reading of the day contained in the lectionary. Near the lectern is the font used in the Sacrament of Baptism. 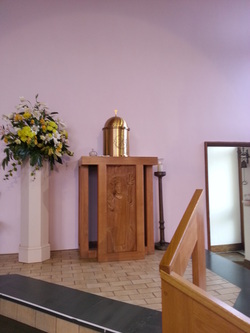 To the right of the sanctuary is the dome-shaped tabernacle, restored to its former glory in October, 1994. It was originally donated by the Guild of the Blessed Sacrament at the dedication of St Mary's in 1964, but was replaced by another tabernacle when the church was refurbished.

Beside the tabernacle there is a candle in the red glass holder; called the sanctuary lamp, this is alight constantly except when the tabernacle is empty, as on Good Friday and Holy Saturday. When alight it therefore reminds us of the real presence of God.

After the Mass any remaining consecrated Hosts are reserved and safely kept in the tabernacle until such time when they are taken to the sick or housebound of the parish, either by the clergy or “Extraordinary Ministers of Holy Communion”.  The tabernacle contains the consecrated Hosts which are the Body of Christ, and therefore particular reverence is shown for the Blessed Sacrament by genuflecting (bending the knee or bowing/bending one's head in respect), when facing the tabernacle. The stand on which the tabernacle is secured is carved in a similar design to the altar and shows our Lord Jesus.

The large decorated candle on the sanctuary is called the Paschal candle, which signifies Jesus' rising from death to life. It is renewed each year at the Mass of the Easter Vigil. [The celebrant marks a cross in the wax of the candle. He then traces the Greek letter alpha “A” above the cross, and then the letter omega “Ω” below the numeral of the current year between the arms of the cross. He inserts five grains of incense in the candle in the form of a cross. He then lights the candle from the new fire which had been prepared and blessed outside the church at the start of the Service of Light].

At the Easter Vigil ‘catechumens’ are baptised, confirmed and receive their first Holy Communion; and ‘candidates’ (i.e. baptised, new adult members) are confirmed and formally received into the Catholic Church.

They begin on the tabernacle side of the church as follows: